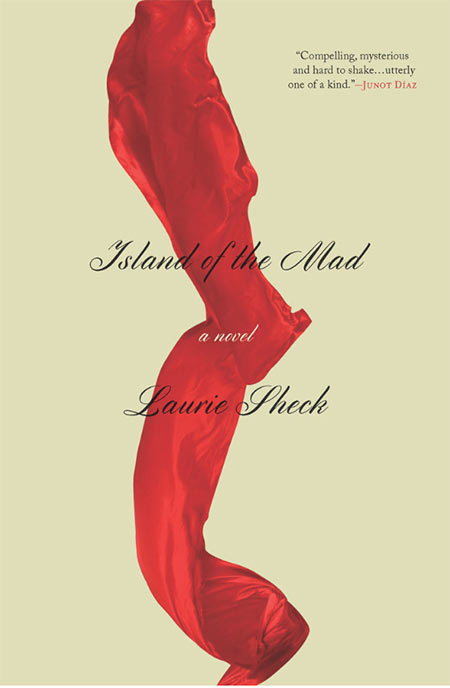 Island Of The Mad

Extending the prismatic, collage-like approach of A Monster’s Notes, Island of the Mad follows the hunchbacked, solitary Ambrose A from his days as a book-scanner in a digitizing firm’s dim basement office to his travels in Venice and his search for a lost notebook. As time and space become increasingly porous, he encounters such figures as Pontius Pilate, Titian, Dostoevsky, Mikhail Bulgakov, and Bulgakov’s resourceful devil, Woland. He also encounters the murderess Frieda, a walk-on character from Bulgakov’s Master and Margarita, who here resides on a plague island in the Venetian Lagoon as day after day she makes visitations to Ambrose and schools him in the facts of the Venetian Plague of 1575. Penitent, as isolate as Ambrose, her facts lead him into questions of ethical loneliness, tenderness, injustice, and ultimately what constitutes the human.

After Frieda’s sudden disappearance, Ambrose comes upon the written traces of two former inhabitants of San Servolo, the Venetian lagoon’s old hospital island, commonly known as the Island of the Mad. One epileptic and the other suffering from Fatal Familial Insomnia, they spend their days together reading from Dostoevsky’s novel, The Idiot.

Fueled by the transformative, compelling dynamics of the internet, while at the same time deeply anchored in an ongoing conversation with past writers and thinkers, Island of the Mad radiantly explores the often contradictory, complex, nature of empathy as it turns the ordinary world inside out and shows us its glittering seams.

“Compelling, mysterious and hard to shake…utterly one of a kind.”
—Junot Díaz, The Brief Wondrous Life of Oscar Wao

“Island of the Mad is nothing short of brilliant. Its hybrid form hovers between poetry and fiction; grounded in a deep understanding of the past it is also perfectly contemporary in its idioms and concerns. This is ambitious, cutting edge work, both intimate and daringly literary at once. Laurie Sheck is an American Original.”
—Lewis Hyde, The Gift

“Laurie Sheck is one of the most gifted and original writers at work today; I don’t know of another who so deftly combines the poet’s lyricism, the novelist’s grasp of character and suspense, and the scholar’s love of historical detail.  Her previous and path-breaking book, A Monster’s Notes, was unlike anything I’d ever read, haunting and exhilarating.  Her latest, the dream-like and mysterious Island of the Mad, is, if anything, even more powerful and moving—and is a book that will be treasured and taught for many years to come.”
—James Shapiro,  The Year of Lear: Shakespeare in 1606 & winner of the Samuel Johnson Prize for 1559: A Year in the Life of William Shakespeare

“Laurie Sheck’s Island of the Mad plunges into language like a silken dagger, removing us to plague years and haunted mysteries that might just remind us of contemporary lives and dreams.  An amazing, exhilarating read that creates its own maze and accompanies the reader deeper and deeper into a miraculous world.”
—Jayne Anne Phillips, author of Quiet Dell and Machine Dreams

“An exquisitely intricate and moving literary pastiche…  In concise, haunting, inquisitive, and incantatory passages, Sheck imaginatively and compassionately explores the mysteries of the body and mind, of brokenness and aloneness, while celebrating language as a lifeline across pain, time, and space.”
—Donna Seaman, Booklist

“A Pulitzer Prize finalist in poetry and author of the reverberant A Monster’s Notes, Sheck returns with a gorgeously written work that layers together strands of history in one bravura act. VERDICT: A dizzyingly inventive work that reveals a strong sense of human connectedness;
highly recommended for anyone who doesn’t want just plot.”
—Library Journal

“Laurie Sheck is a true American original, and Island of the Mad is a remarkable hybrid text that at once pushes the boundaries of literary fiction and poetry and speaks to the reader with tremendous insight and compassion about human suffering and survival.  At once wise and thrilling, beautiful and challenging, mysterious and inviting, Sheck’s work cuts to the heart of all that is most challenging and wondrous about human experience. To read Island of the Mad  is to have “felt the world touch” us – as the narrator puts it – “with its strange, unpredictable hand.” And what else could we want of literature but this? “
—Meghan O’Rourke, The Long Goodbye: A Memoir